Putting the Rad in Radar: A Gun Which Can Catch You Texting is in the Works 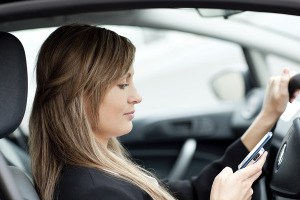 If you think you’re safe from a ticket because you’re texting below window level, think again. A Virginia-based company called ComSonics is developing a new type of radar gun that could allow law enforcement officials to determine whether or not you’re texting and driving. The gun will hone in on frequencies emitted by your cell phone; since cell phones emit different frequencies for calls than they do for texts, police will be able to tell if a phone in your car is being used for texting purposes.

The company is still working on the prototype, and they acknowledge that there are “still hurdles” to get over, according to The Virginian-Pilot. There are concerns about privacy to consider, though the gun wouldn’t allow any messages to be deciphered. There is also the chance that a cop could detect texting by a passenger in the car as opposed to the driver.

The development of this type of radar gun would have an interesting effect in our state. Hand-held cell phone use is illegal in Tennessee, but it may be argued that it is legal to use a text to talk device through your Bluetooth, and we don’t know which frequencies the cell would emit in that method.

But the goal of the gun – to cut down on cell phone-related accidents – is a noble one. Distracted driving as a whole is dangerous, and it could lead to serious fines and points on your license. In Tennessee, you can be charged with distracted driving for:

Distracted driving can have serious consequences, and eliminating even one portion of those cases is a good start. The problem, of course, is that the gun would make it very difficult to prove a person had been texting unless there was only one passenger in the car. The time and money spent on introducing this device may not prove worth it in the long run.

If you’ve been charged with texting while driving, contact Lowery, Lowery & Cherry in Lebanon, TN. Our experienced criminal defense attorneys have helped numerous drivers in the same position you are.

We Will Represent You For Any Type of DUI Arrest

Can I choose between a blood, breath or urine test when arrested for drunk driving in Tennessee?

No. Tennessee law permits a police officer to decide which test(s) to administer… Read More