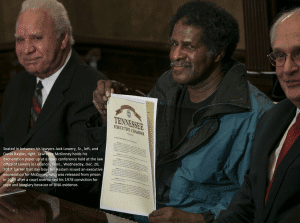 After 31 years in prison, Lawrence McKinney was released in 2009, after DNA evidence proved he was not guilty of the rape and burglary offenses for which he was wrongfully convicted. Mr. McKinney came to B.F. “Jack” Lowery after his release in 2009 and told his story. Mr. Lowery determined to help Mr. McKinney in his quest not only be free, but to be exonerated by the Governor. The parole board not only denied Mr. Lowery’s request for a recommendation to the Governor for exoneration, they simply treated Mr. McKinney with contempt. For the next eight years, Mr. Lowery fought for exoneration, and is pleased that the Governor has given this case a close look, and determined exoneration was to be granted.

You can read the Governor’s statement here.

If you or your loved one needs representation in a criminal matter or post-conviction case, call the Criminal Defense Team at Lowery, Lowery & Cherry, PLLC at 615-444-7222, fill out our contact form, or visit us on the web at www.lowerylaw.com.

Posted in Criminal Defense, In The News